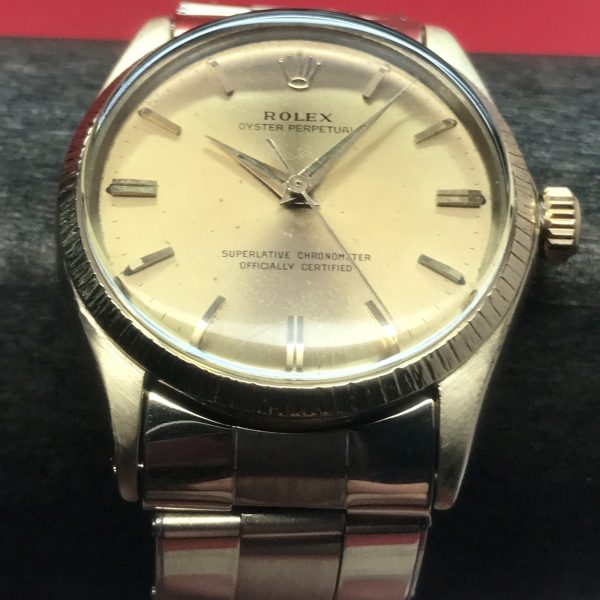 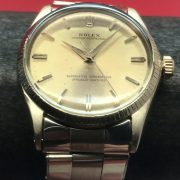 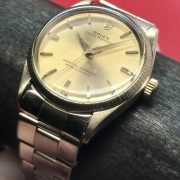 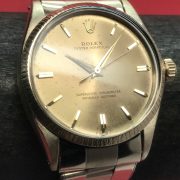 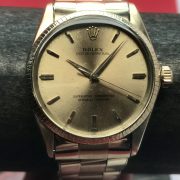 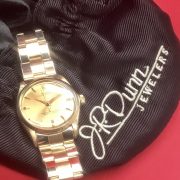 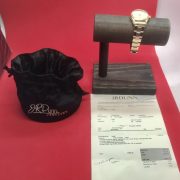 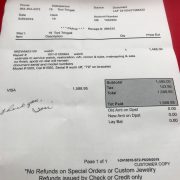 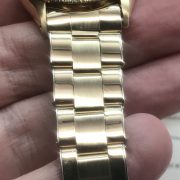 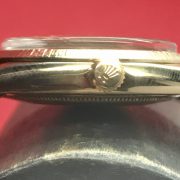 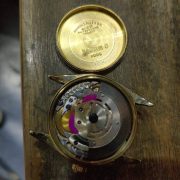 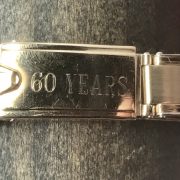 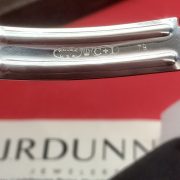 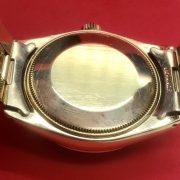 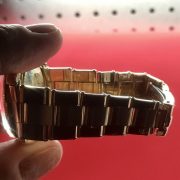 We take trades against any of our watches!!! We also buy watches and watch packages.

Just back from Rolex service ($1,588.95) today Aug 29, 2019! This beautiful watch has just been completely service, new crown & tube, mainspring & axle and complete overhaul and it looks stunning! Comes on an authentic Rolex yellow gold filled bracelet that is super tight! Original Movement, Dial, Case, etc! The serial number has worn off slightly so I can’t tell you the exact production year, but Rolex used the Caliber 1560 only from 1959-1965 so this beauty is produced sometime during that era.

As you can see from the service receipt, this Rolex is Ref 1505 and features the CoSC Rolex Caliber 1560 Movement! If you are not familiar with the Caliber 1560 Rolex Movement, here is some info:

The 1560 was the start of the second generation of the 1500 series calibers. They released this movement in 1959 and it remained in use until 1965. With a 26 jewel self-winding automatic movement, it had a Rolex p/n 7980 balance assembly with Microstella screws, a Bregeut free sprung hairspring. It also had a frequency of 18,000 bph. Furthermore, the KIF Flector shock absorbers protected the 1560. Also, it used a traditional stone lever escapement and had a power reserve of 42 hours.

Rolex released this series with a date function version, the 1565, and with the addition of a 24-hour hand in the 1565 GMT. Although there was no Quickset mechanism, the 1500 calibers came with the cam and jewel system. This system was able to create an instantaneous date change at midnight, still used by Rolex today.

The unfussiness of the original, no-date movement made it the ideal caliber to sit inside the Oyster Perpetual series. This began with the ref. 1002 released at the end of the fifties. Its modest height of 5.75mm and diameter of 28.5mm, or 12.5 lignes, allowed it to fit comfortably in the 34mm to 36mm cases of the range.

Moreover, they also used this movement in two more of today’s most highly coveted vintage watches.

The Rolex Explorer ref. 1016 is considered by purists to be one of the brand’s most starkly beautiful designs. Also, it’s one that changed very little in its long production run from 1963 to 1989. Originally powered by the 1560, it was replaced by the 1570 in the late 60s.

As one of Rolex’s sports watches, it was always somewhat overshadowed by the likes of the Daytona and the GMT Master. These models were given significantly greater updates over the years. But, as a discreet and extremely simple three-hand timepiece with no complications, the Explorer 1016 is a timeless and elegant example.

The other model to house the 1560 was anything but overshadowed. The Submariner 5512 was launched in 1959, again with the quickly exchanged 1530. It remained in production for nearly 20 years.  In fact, the Submariner became an icon of the Rolex brand and one of the most influential designs ever made. Today, the ref. 5512 Submariners are a huge favorite among collectors; a surprisingly attainable classic that represents an important milestone in Rolex history.

WATER RESISTANCE: – 30m – this is a vintage piece so I wouldn’t recommend swimming with it on.

STRAP/BRACELET: – Rolex Yellow Gold filled oyster bracelet that will fit up to an 8 inch wrist. – inscription on clasp that says 60 years.

Let us know what you have in your collection!!

Let us know what you have in your collection!! I consider all watches in trade! Please upload pictures and include details of your trades through my Trade/Buy tab at the top of my homepage.

There are no reviews yet.